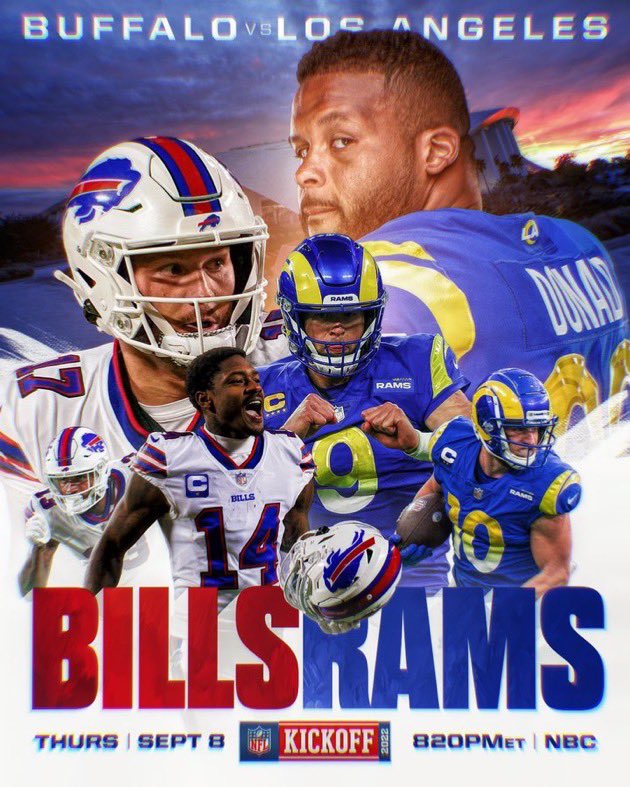 After one of the most tumultuous off-seasons in NFL history, with big name players being traded left and right and headlines dominating front pages day after day, football is finally being played. Following an equally competitive and drama-ridden 2021 season, fans harbor higher expectations for 2022 as the season kicks off.

The season started out with a highly anticipated matchup between both preseason Super Bowl favorites: the Buffalo Bills and the Los Angeles Rams. The game, which many thought could be the game of the year, brought in a whopping 26 million viewers from all across the globe. Everything was aligning, with both top five offenses and top five defenses clashing in just one night. The Bills started out hot, with Josh Allen completing his first ten throws en route to an opening touchdown drive. The Rams, however, tied it up around halftime due to a Cooper Kupp touchdown catch, making the score 10-10. But the second half was a different story; three Matthew Stafford interceptions and a massive half from the Bills offense led to the Bills winning in a blowout 31-10.

“I was very shocked by the results of the Bills and Rams game,” freshman Ethan Shepard said. “I expected the game to be neck and neck the whole way through since both teams were Super Bowl favorites to begin the season.”

On Sunday, the main slate of NFL games began with even more anticipation as the sports world raved for football to finally start. The games, amid the many turnovers and injuries, lived up to the hype. All but five of the 14 games played on Sunday were one-score games and had very unpredictable endings. During the Steelers-Bengals game, Cincinnati still had a chance to win despite QB Joe Burrow’s four interceptions, but the extra point was blocked and the game was sent into overtime. Later in the game, both kickers missed easy game winners in the final seconds; however, Steelers kicker Chris Boswell nailed a kick that won the game 23-20. Around the same time, the Saints came back from being down 16 points in their second half to complete the largest comeback in their team’s history, winning the game 27-26 against the Atlanta Falcons.

As Week One came to a close with a thrilling Monday night game in Seattle, Week Two opened up with yet another exciting game. Thursday Night Football opened up with two Super Bowl contenders: the Kansas City Chiefs and the Los Angeles Chargers, who were both 1-0. The game opened up with a great offensive play by the Chargers, setting them up for a 17-7 lead midway through the third quarter. But a comeback by the Chiefs, plus a 99 yard pick six by Kansas City defender Jaylen Watson, essentially sealed the game for them, winning it 27-24.

“Since the first play, I thought the Chargers had full control of the game,” senior Rohan Sharma said. “And when the score came up to be 17-7 I again thought that the game was just about over and turned off the TV, but just a few minutes later I turned it back on and the momentum completely switched.”

The vast majority of NFL fans had immense expectations for the opening weeks of this year’s football, and it certainly reached, if not exceeded, those expectations. Almost every game either came to the final seconds or was just flat-out exciting, and NFL fans are eagerly anticipating for the season to come.