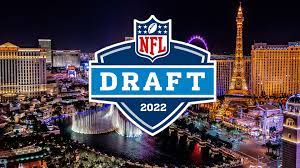 After months of endless speculation in the NFL world, the day fans waited for since the final whistle of Super Bowl 56 has finally come. Now, instead of projections, it is easy to grade how the draft experience went for each team. Some teams took a major step forward with the 2022 NFL Draft, some may have taken a small step backwards.

The draft has come a long way since broadcasting from Commissioner Roger Goodell’s office back in 2020. Even though the draft was in person last year, it was not at 100% capacity, and thus did not feel the same. But this year, the energy of all the fans and the reactions to every pick was back on display even through the last round.

The position of the first pick was to some an obvious one; however, the player selection was not as obvious. The Jaguars needed an electric pass rusher. The main options were Georgia defensive end, Trayvon Walker, or Michigan defensive end, Aidan Hutchinson. Both were incredible players during their respective college seasons, but the Jaguars ended up going with Walker on draft day. Interestingly, Walker shot up everyone’s projections in the final week before the draft for apparently no reason other than his physical upside. With the Jaguars selecting Walker, Hutchinson instead went second to the Detroit Lions who were also in need of a pass rusher.

Other picks in the first round were just as notable and surprising. For instance, Ahmad Gardener was taken fourth by the New York Jets. Gardener is a unique draft pick because at his time in Cincinnati, he did not allow a single touchdown in four years and was considered to be the best cornerback in the draft. Other interesting picks include Kayvon Thibodeaux from Oregon, who at one point was considered to be the perennial number one pick in the draft, went fifth to the New York Giants after character concerns and bad competition dropped his rankings.

When it comes to how teams drafted, there are obviously good and bad drafts. Some of the latter include the Chicago Bears. This is because their front office drafted the opposite of what they needed. They had the worst offensive line last year and did not address that till the much later rounds of that draft. Instead they tried to add to their defense which also failed because there are immense questions about each of those picks. Some of the best drafts on the other hand that teams had include, the Kansas City Chiefs. This is because during the offseason they traded away a lot of their talent and had a lot of holes to fill. They arguably have the two best steals of the draft with George Karlaftis and Skyy Moore at wide receiver.

Overall this draft exceeded a lot of expectations with a lot of uncertainty and regards to excitement. Many unique players were picked, looking to give their teams whatever help they need, whether it’s to make a team competitive or possibly help win the super bowl.