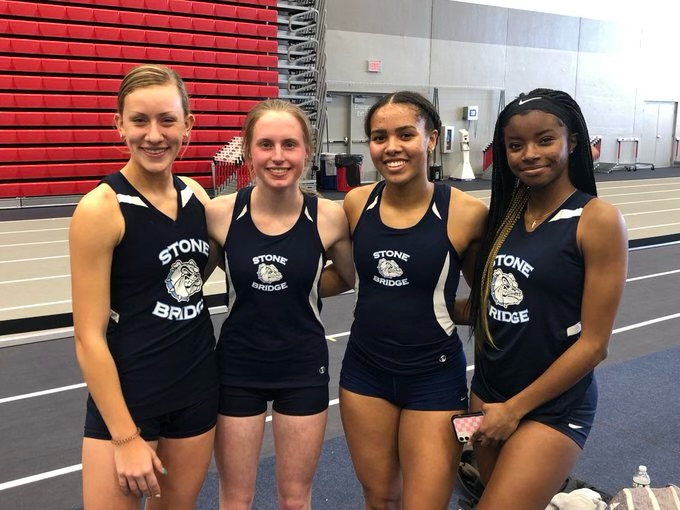 Stone Bridge just wrapped up its 5th year of indoor track, and a few students on the team qualified for the state meet. With three seniors, Lydia Wallis, Alex Ryan, and Natalie Mial; one junior, Annie Sullivan; and one sophomore, Indira O’Neil, all five of the Stone Bridge track students placed in the top four in at least one event.

Three seniors broke school records at states, and Wallis won the competition in the 1000 meter race. Meanwhile, Ryan placed second in the 1600 meter, and Mial placed fourth in both the 55 meter sprint and 300 meter dash.

“It was an incredible feeling to have won state after four years of training and placing second in the same race last year,” Wallis said. “I was very stressed before this race, so when I finished I felt a huge sense of relief that it had gone well. I’m very proud of myself, and thankful for my coaches and teammates for helping me with this accomplishment.”

Wallis was not the only one who enjoyed her time at states: both Ryan and Mial had similar experiences during their times at states.

“It was a great feeling [breaking the school record at states],” Ryan said. “I had been working towards getting [the record] all year, so I was really happy to finally achieve my goal.”

Mial, who stated that her favorite moment was breaking the school record in the 55 meter at the state level, said that competing at states was definitely a standout in her season.

“It was very exciting and nerve racking to compete at states against good teams and athletes.” Mial said.

For sophomore Indira O’Neil, the most memorable experience was in the state final meet, where she felt like competing was stressful, but still satisfying because she was proud of herself and her team. She is also planning on using the momentum from the indoor season to accomplish similar goals during her outdoor track season.

“My favorite moment of this season was probably in [the] state finals because I ran a PR,” O’Neil said. “For [the] spring season, I’m going to remain focused and continue to work towards the main goal: states.”

Ryan, who is also part of the spring track team, hopes that this indoor track season will help him going into his final outdoor season before he attends Bonaventure University.

“Hopefully I’ll keep building momentum and win the state championship in outdoor track,” said Ryan. Ryan believes in his goal for the spring because of his coaches and teammates “who push [him] everyday.”

Other athletes on the team feel like they benefited in similar ways to Ryan, and also feel like indoor track has helped them build self-esteem throughout the season.

“In the beginning of the indoor season, I wasn’t having good races because I wasn’t confident in my fitness,” Wallis said. “However, I was still able to finish my season on a good note, which shows me that I shouldn’t get discouraged when one race or two doesn’t go well. I only won state by a second, so I need to keep working hard for the spring season if I want to win another state championship.”

Overall, this sport has helped these athletes find success in both the athletic and academic worlds, helping them improve as student-athletes going into college.

“I will take away the discipline that is built from managing school and sports,” Mial said. “[During my track career,] my parents, coaches, and friends have helped [me] become the person and athlete that I am today.”