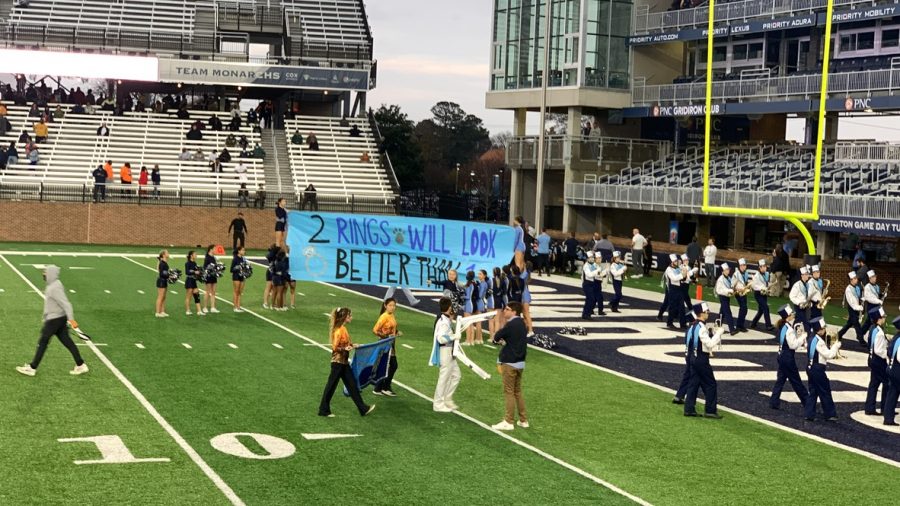 Ending the 2021-2022 season off with an undefeated 15-0 record, the varsity football team secures the state title for the second season in a row. This also marks the second state title win within the year of 2021 after last season’s spring schedule.

On Dec. 11, the varsity football team played against Maury High School at Old Dominion University for the class 5A state champion title. The game ended with the final score of 27-21, bringing the title home once again.

“I was honestly in shock,” running back Eli Mason said. “I was so excited but after Zeke scored I was still trying to figure out what just happened because I couldn’t believe it. After I realized we won, I just wanted to hug all my teammates and my coaches, especially my dad.”

The dog pound came in Stone Bridge gear despite the four hour drive, holding various signs such as: Lockdown Laing, Kicker Dylan, Zeke Freak, He (Jacob Thomas) is Him, and more. They rallied the team on as they did throughout the entirety of the season.

“It was an emotional rollercoaster,” kicker Dylan Dasterjerdi said. “I was stoked but pretty shocked by how things went in those last few plays.”

“It’s an honor to be back,” Dastejerdi said. “Not many teams get to do what we do on a yearly basis.”

Indeed, the varsity football team has made it to the state finals three years in a row, coming out twice as state champions.

“It feels great to make states again as I made it last year as a sophomore,” safety Domenic Duncan said. “[Since] I already have one under [my] belt, I can just go out there, ball, have fun, and bring the state championship home with my brothers again.”

The Bulldogs’ last state game was in spring of 2021, and they brought the heat again this fall after a ferocious battle for the 5A state title.

“I feel amazing right now, this is probably one of the greatest feelings ever, especially after such a hard fought game that came down to the wire like it did,” Mason said. “I’m just extremely happy for all my coaches and my teammates, especially the seniors being able to go out right.”

The score had been tight-knit throughout the entirety of the game, nearly going into overtime before the 42-yard throw from quarterback Jacob Thomas to Ezekiel “Zeke” Wimbush. With five seconds left on the clock, Thomas threw a triumphant hail-mary that brought the win home.

“I honestly don’t know [how it happened],” wide receiver Ezekiel “Zeke” Wimbush said. “I was just focused on making a play to help the team.”

The 42-yard play was an unbelievable play, rendering Wimbush’s teammates and the dog pound speechless.

“I could only see that Zeke caught it but then I couldn’t tell he got it in until everybody started going crazy,” cornerback Zach Laing said. “I just sprinted over there because I couldn’t believe it.”

At one point in the game, Maury had the advantage after scoring a touchdown in the final six minutes. Despite that advantage, the Bulldogs’ fought until the end. The  touchdown made by Dylan Hundertmark and a successful two-point conversion by Jacob Thomas in the final five minutes brought them to 21-21.

With a huge stop made by Zach Laing, the possession of the ball was once again handed back to the Bulldogs’ before making the game-winning touchdown in the final five seconds.

“I did make crucial plays on defense that we needed,” Laing said. “It’s just crazy that both state wins ended on a final play. I mean we all put the work in and as a senior it feels good to be sent out right.”

Last year, Stone Bridge had a game-winning, one-handed touchdown catch by Jacob Thomas against Highland Springs in overtime. The Bulldogs played Highland Springs again in the state semifinals last week, defeating them in a nerve-wracking 28-26 game.

“I would’ve never thought it would happen again, let alone twice in one year,” quarterback Jacob Thomas said. “I just knew I had to give Zeke a chance at the end zone. Throwing it short like that gave him an opportunity and he made the most out of it.”

With the season wrapping up, the seniors leave Stone Bridge with a final record of 15-0.

“I [would] just like to say to all the younger guys on the team getting ready for next season, is to just cherish every single moment you make with each other and to carry on the Stone Bridge legacy and tradition,” Mason said. “To the Dog Pound, I want to say thank you to everyone for all the support and cheer for these 4 years, I couldn’t ask for any better group of people to cheer us on every game. Lastly, it will always be: SBOE forever.”