Volleyball Goes Down in SBHS History 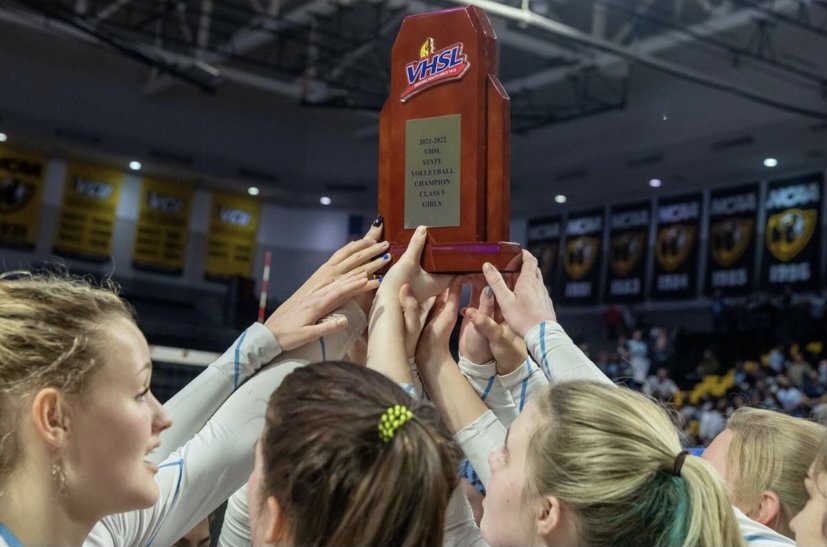 After finishing second in the district in-season, the team first played against Riverside (7-8) for district semi-finals, a team that Stone Bridge had previously lost against in-season. After a long nail-biter, Stone Bridge won in the fifth set 15-13.

What followed were five-set games against Briar Woods (11-6) in the district finals and Albemarle (16-9) in regional quarter-finals. In regional semi-finals, Stone Bridge had to once again face Riverside. After dropping the first two sets, Stone Bridge fought back and won the final three sets 25-16, 25-15, and 15-13.

“The entire playoff run [had some of my favorite moments] in the fact that we battled so much in the district playoffs with five sets and every game in the playoffs we improved,” varsity volleyball Coach Jill Raschiatore said. “Near the end we started winning in three sets rather than five.”

Next, varsity volleyball had the battle against Patrick Henry (26-6), who they had lost against 1-2 during in-season gameplay. The lady bulldogs put in their best effort and swept their opponent 25-18, 25-22, and 25-9. From then on, Stone Bridge swept every team in state playoffs, including the class 5 state championship against Frank Cox (20-4).

“The feeling of making Stone Bridge history is unexplainable,” right side hitter Gabby Flamish said. “We have worked so hard and gone through so much, this was definitely deserved. We have come together throughout the season and I couldn’t imagine doing this with any other group of athletes.”

“[A critical point in the season] was the game against Loudoun County,” Coach Raschiatore said. “It was a turning point where the players started believing in themselves and they were like, ‘Wait, we are a good team!’”

“I think the turning point in the season [was] when we played Loudoun County and won,” Flamish said, “After beating a historically powerhouse team, [it] instilled the confidence we needed when facing any other team of any caliber. That game really showed us that if we really wanted to do something, we could. Nothing could stop us after that win. We pushed through injury and sickness and came out on top.”

Once that game passed, Stone Bridge Volleyball dominated almost every game and defeated a total of 18 different teams throughout the entire state.

“No one was focused on themselves,” Coach Raschiatore said. “We had such good team chemistry, which I haven’t seen in a team since 2009, and everyone wanted the team to win. Everyone continued to improve, and I would love to see how well the team would play now if we were still [in playoffs].”

The team is not finished yet; with only two seniors graduating before next year, the team sets its sights on being a force yet again in the 2022 fall season.

“Next season I’m expecting the same, strong outcome,” setter Trisha Guevara said. “I think that if we play the same we did this year with the same goal and drive, we have a very good possibility [of] winning states again!”