One Year Since #StopAsianHate 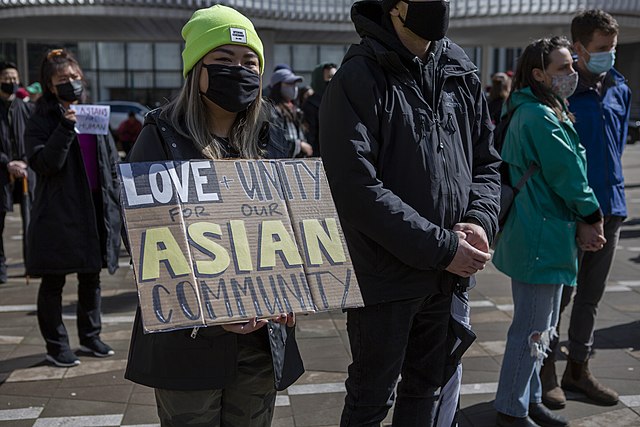 Since the start of the deadly pandemic that struck the world by storm, many Asians have come to share their experiences and stand up to hate. Now, in March 2022, it has been one year since the start of #StopAsianHate movement.

However, this doesn’t mean that the hate started with the COVID-19 pandemic; anti-Asian violence has occurred since the first time that Asian immigrants arrived in America. The sentiment has strengthened through the 19th, 20th, and 21st centuries. Finally, after centuries of mistreatment, some Asian American voices are being heard.

This visual from WBUR depicts anti-AAPI acts that have been inflicted among the AAPI community, verbal harassment being most frequent among them. Too many times have Asians been referenced with racial slurs, discriminated at work, and coughed on. Whether it’s verbal harassment or being spat on, it’s not just harmful, it’s fear mongering.

For many Asians, dealing with this mistreatment has been highly stigmatized. The lack of awareness to emotional and mental health becomes detrimental.  “People may be reluctant to admit to experiencing symptoms of poor mental health — especially if they feel the questioner isn’t sympathetic to their cultural experience,” Angus Chen of WBUR said.

The year of 2020 and 2021 was eye-opening for everyone, especially with the deluge of horrific crimes that were inflicted among people of color. These crimes occurred among many members of the Black community and Asian community, which, in turn, brought more drive to Black Lives Matter and Stop Asian Hate to correct the wrongs and bring justice to victims.

Rallies were held nationwide throughout the months of March and May of 2021; protesters demanded to stop the hate against Asian and Pacific Islander communities. But why did it take so long for people to finally see what was wrong? Was it the Asian student who was attacked in Wisconsin? Or was it the man who attacked two Asian-American women in Baltimore?

What about the man who walked into not one, but three spas to kill eight people, most of whom were Asian women? These events aren’t just damaging to society, but traumatic to the victims and those in their community, too.

As recent as Feb. 14, 2022, a woman was stabbed to death after a man followed her to her apartment. An elderly woman was punched because her assailant “doesn’t like how Chinese people looked”.

These occurrences are harmful to the nation in the long term.

In response, Asian icons and celebrities have come out to voice their experiences, including Sandra Oh, Jeremy Lin, Gemma Chan, Naomi Osaka, John Cho, Eric Nam, and many more.

“Everything about this is tragic and wrong. But this is the way it’s been and continues to be,” Eric Nam said in his article on Time. “Several still ask, ‘Why haven’t you said anything?’ Let’s be very clear: we have always been pleading for your help, perhaps more than ever over the past year. You did not listen. You did not hear us.”

Passing 364 to 62 in the House of Representatives and 94 to 1 in the Senate, the COVID-19 Hate Crimes Act projected a strengthening of the system to better identify and investigate hate crimes that are committed against the Asian community. This was a larger step toward stopping the hate in America, but it will take time to see its true effect.

With Lunar New Year being celebrated on Feb. 1, many of those who celebrate in unity to honor their heritage and culture resorted to celebrating at home. “It is a celebration of our heritage and our families,” co-founder of Stop Asian Hate Russell Jeung said. “I want our community to really do that this year, to respect our elders by fighting against the racism that we’re experiencing.”

There has been progress made in the year since the Stop Asian Hate movement, but there is so much left to do. The permanent mark of Asian Americans seemingly being a “burden” to society will be a mark on societies’ downfall. It’s exhausting, reading daily articles about how many members of the AAPI community have to go through these horrible conflicts during a year that hoped for unity and peace amongst one another.

In this next year, educate yourself and check up on others–not just the Asian community, but anyone no matter where they’re from, their identity, or their skin color. Take action, and remember the words of Eric Nam: “Being silent is being complicit.”