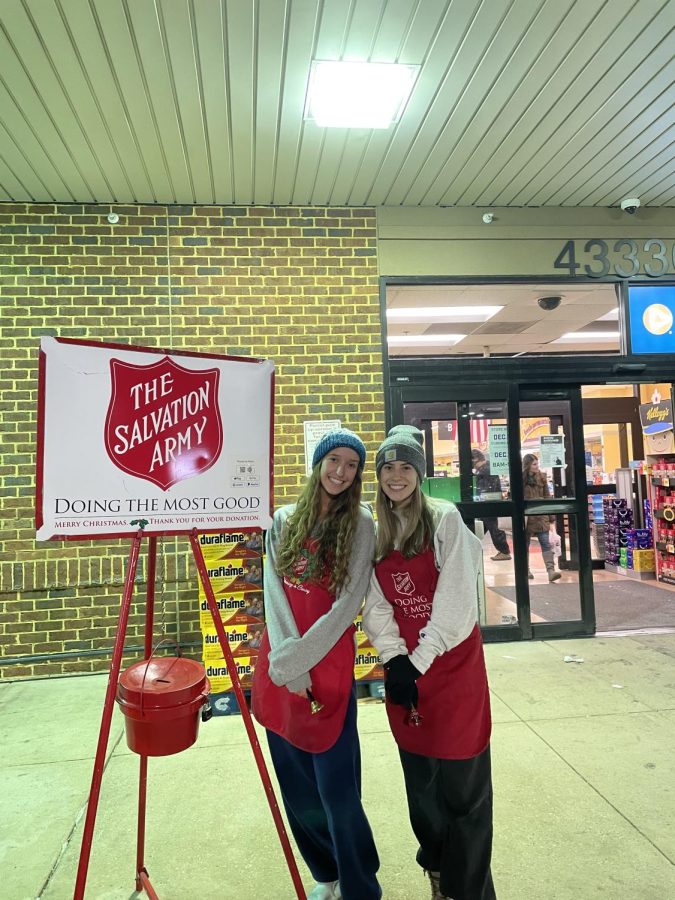 You’re walking to Giant to pick up the last few items for Christmas dinner and you hear bells ringing in the distance. No, it’s not Santa…it’s Key Club! Dressed in red aprons and accompanied by a Salvation Army sign, their music blasts full of holiday cheer.

Curious as to why anyone would stand outside in less than 40 degree conditions? Key Club teamed up with the Salvation Army to bring joy during the 2021 Christmas.

Wearing red Salvation Army aprons, Key Club volunteers stood outside of the Junction Plaza Giant from Dec. 17 to Christmas Eve collecting toys and gift items for impoverished children on Christmas. Both Key Club and the Salvation Army worked hand-in-hand in order to make sure no kid went giftless on Christmas.

Key Club, a brainchild of Kiwanis Club, was launched in 1925 to start a junior service club at the high school level. The new club was to model the Kiwanis volunteer organization and was primarily composed of “key” students of their school to create school spirit, hence the name “Key Club.”

“We stood around, rang bells, and talked to people going to Giant,” senior Amy Dajani said.

The Bell Ringing event is an annual volunteering event in December. The event invites people to give money, toys, clothes and giftable items, with the end goal to bring a destitute person happiness.

“We do this to help the Salvation Army give back to those in need,” co-president Maggie Wallis said.

Just one hour of bell ringing can help to provide 13 meals to people who cannot afford it.

Not all the work is about the toys, however, because just one hour of bell ringing compensates for 13 meals for those who cannot afford it.

“First we greet them and say ‘happy holidays,’ hoping to get donations,” senior Jemma Guilliano said. “Really, it’s just to make someone smile and get people excited for the holidays.”

This excitement has been building since 1891 when the Salvation Army Red Kettle Campaign was first established. Salvation Army Captain Joseph McFee had taken notice of the amount of people in San Francisco that were going hungry and decided to provide free Christmas dinners for them. However, funding for this campaign was a problem. His solution was to leave a kettle just like how tailors tossed coins into kettles for the poor and made a sign that read, “Keep the pot boiling.” Soon enough, people donated to the pot, and McFee made enough to provide a few free Christmas dinners.

“The club that started out as a vocational guidance program expanded to become a complete service organization for the whole school,” The Key Club official website said. “It also offered a social aspect to balance its service activities.”

Today, the club is the oldest and largest service program for high school students, and is recognized by plenty of colleges as a leadership and volunteer organization.

“This event is really important to us because it’s what Key Club is all about.” Wallis said. “Being able to enjoy what we’re doing and to have it make a big impact on other people’s lives, is something that really puts a smile on our faces.”