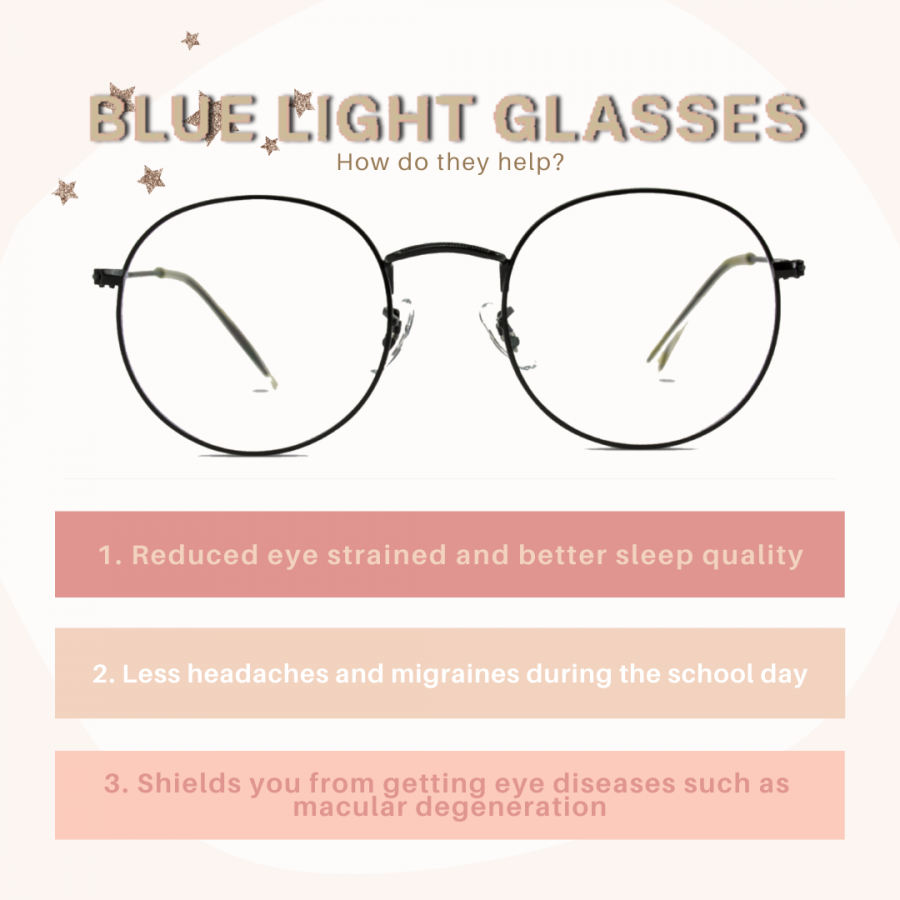 Since the start of distance learning, it caused many students to have headaches, migraines, and difficulty focusing — but with the investment into blue light glasses, it has been proven to be effective with reducing them.

“They have allowed me to concentrate on the computer for a prolonged amount of time without getting a headache,” junior Kyra Campbell said.

Blue light affects the eyes by passing through the cornea and lens and reaching to the retina. It then affects vision and may cause prematuring to the eyes or headaches, migraines, and increase the risk of macular degeneration.

Macular degeneration is an eye disease that can cause vision loss. Macular is the leading cause of vision loss, more so than cataracts or glaucoma as it is incurable.

“I’ve definitely noticed that I get less of a headache now, and my eyes are less tired after wearing them,” junior Alaina Kasulaitis said. “Before I started wearing them, my eyes would blur after looking at the screen for so long. But now that I wear them, that doesn’t happen.”

“Light that looks white can have a large blue component, which can expose the eye to a higher amount of wavelength from the blue end of the spectrum,” A report from Prevent Blindness said.

Sunlight is white light, combined by the colors red, orange, yellow, green, blue, indigo, and violet. The rays on the red end of the spectrum’s wavelength are longer and have less energy while the blue end uses more energy with shorter wavelengths.

Many students have reported getting headaches from staring at the screen all day long before getting the blue light glasses.

“They’ve helped me with reducing headaches a lot and I get really bad migraines,” junior Jillian Freitas said.

Multiple studies have shown that too much exposure to blue light with higher energy can damage light-sensitive cells in the retina, causing macular degeneration or dry, fatigued eyes.

“Most of the time I don’t feel a difference but for longer days of just staring at a screen my eyes will start to hurt or get dry without them,” junior Scott Salvato said.

In a 2017 study from PubMed, John G Lawrenson, Christopher C Haul, and Laura E Downie investigated the effects of blue light glasses and concluded that there was “a lack of high quality evidence to support using blue light blocking spectacle lenses for the general population to improve visual performance or sleep quality, alleviate eye fatigue or conserve macular health.”

Following that study, there were numerous other studies that contradicted the 2017 report.

In a 2018 study by Guillermo Prez Algorta, Anna Van Meter, Bernadka Dubicka, Steven Jones, Eric Youngstorm, and Fiona Lobban concluded that the effectiveness of blue light blocking glasses to enhance sleep, mood, and activity levels in young adults was supported after conducting an experiment on 13 first year undergraduates that had insomnia or low quality sleep.

Whether or not they help students with headaches, migraines, and sleep quality, much of the student body has invested in buying blue light blocking glasses — with and without prescription.

“I would recommend it if a person always wears contacts or has perfect vision,” Salvato said. “They are a bit expensive, so if you’re on a budget then I would not recommend them.”

Amazon is just one of the many online markets for consumers to purchase the glasses for around $15, but sites such as EyeBuyDirect, GlassesUSA, and others can add prescription lenses for an extra $18.

“They kinda seem like a small thing and not that big of a deal, but they really do make life easier,” Kasulaitis said. “It can’t hurt to at least try blue light glasses.”