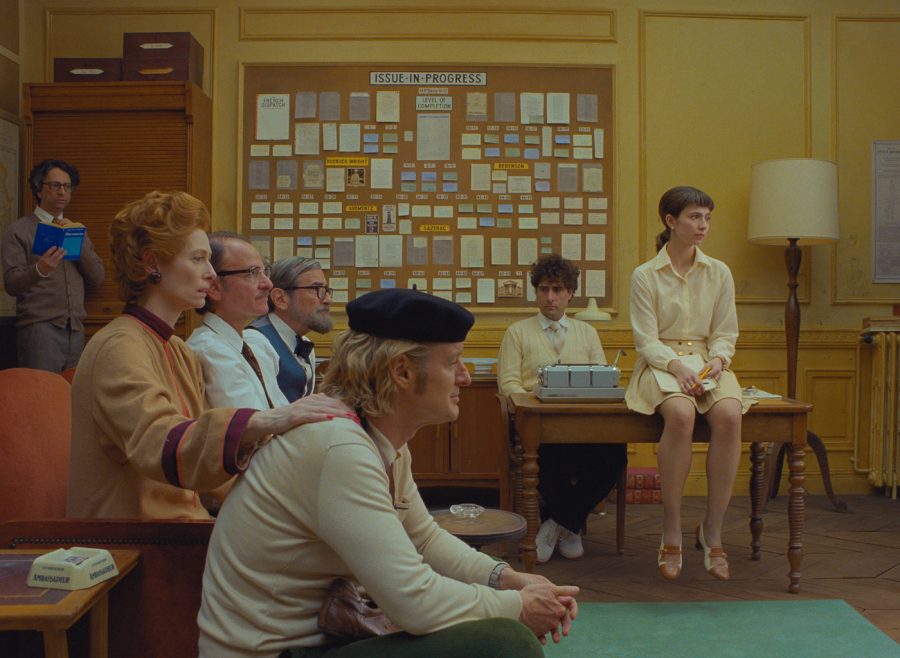 Described as a “love letter to journalism” by critics, Wes Anderson’s French Dispatch, released on Oct. 22 of this year, is an unmissable addition to the Fantastic Mr. Fox director’s repertoire of brilliantly stylized films.

“‘The French Dispatch’ is perhaps Anderson’s best film to date,” The New Yorker writer Richard Brody said in a review of the film. “It is certainly his most accomplished.”

One of the film’s most notable features is its breathtaking, almost unbelievable ability to mimic Anderson’s animated style in a live-action format. Every frame of the feature is an artistic masterpiece, filled with pithy witticisms and subtle appreciations of the journalistic process. Everything down to the movements of the actors is precisely calculated, lending itself beautifully to Anderson’s renowned methodology.

Unlike some of his previous works, Anderson crafted this piece with purposeful drama and thrills, making it difficult to turn away from. The writing is well-timed and sophisticated, though maybe a tad convoluted at times; the viewer may find themselves wondering if they had missed something at certain points in the movie, yet this takes away little from its charm.

“It is, like the settings of most of Anderson’s movies, a place that mixes the real with the just-short-of-real,” Rolling Stone film critic K. Austin Collins explained in a review, “too perfect not to feel manufactured on a soundstage, yet so rife with histories and personalities, stories and idiosyncratic details, it can’t feel entirely fake.”

Perhaps of equal importance, the film’s cast truly brings Anderson’s stylistic vision to life through their skillful, almost doll-like portrayal of his characters. Evoking the spirit of a tortured artist, actor Benicio Del Toro plays his role as Moses Rosenthaler beautifully, allowing himself to be articulated by the masterminds behind the feature to intensify Anderson’s artistic message.

The score of the movie should not be neglected either, especially considering the amount of effort put into it by Oscar-winning composer Alexandre Desplat. An homage to French pop and old-style print, The French Dispatch is filled with elegant music and the indistinct hum of typewriter keys and pencil scribbling.

“He’s going to a world of his own and I like being part of it,” Desplat told the Los Angeles Times. “There is this sense of humor, a lot of poetry and it’s dreamlike. It’s unpredictable—it is a world where the history of cinema is very present.”

Criticisms of the film, though few and far between, described a lack of coherency throughout. However, despite these remarks, many of these same critics still found themselves captivated by Anderson’s craft.

The French Dispatch is, arguably, one of the most well-executed pieces of film to emerge this year. The stunning cinematography, combined with the unparalleled skill of the cast, makes Anderson’s latest film yet another definitive masterpiece in his collection.

“… it’s not a love letter,” Anderson said in an interview with the New Yorker. “It’s a movie. But it’s about journalists I have loved, journalists who have meant something to me.”