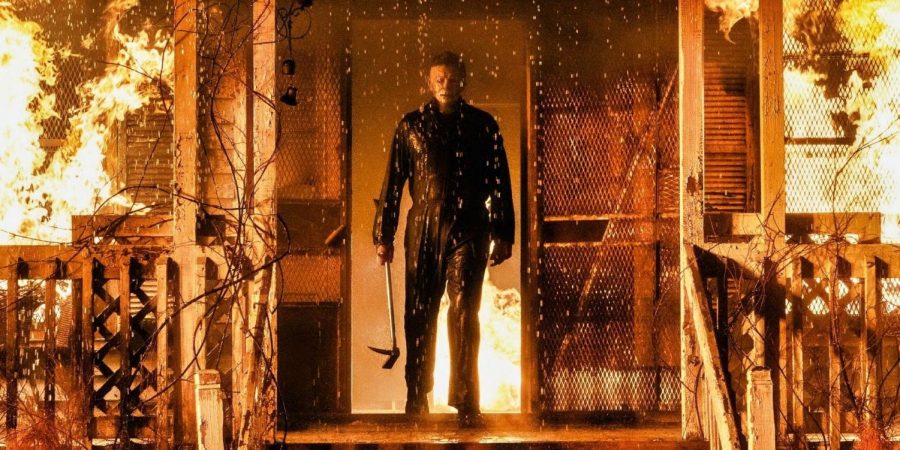 After three years, the much awaited continuation of Michael Myers’s reign of terror has finally arrived in theatres. Will this newest addition to the family be able to captivate audiences in the same way its predecessors did long before?

On Oct. 15, Halloween Kills officially premiered as the third addition to the canonical Halloween timeline. The film takes place only a few hours after the events of Halloween (2018), in which Laurie Strode (Jamie Lee Curtis), her daughter Karen (Judy Greer), and granddaughter Allyson (Andi Matichak) escape the ablaze house, leaving Michael Myers to burn.

It kicks off as Laurie is rushed to the hospital while, at the same time, a response team heads to her house to extinguish the flames, unaware of what lies within them. Released from his cage, Michael quickly returns to his murderous rampage as others recall their personal encounters during his 1978 attack, yet to find out that their dear old friend has come again.

Although the return of original characters such as Tommy Doyle, Lindsey Wallace, and Marion Chambers is a much appreciated touch, there were a few aspects of the film that were severely disappointing.

To start off, the movie strayed from its roots, losing its feel of a traditional horror film and leaning more towards a comedy thriller. There were many more scenes involving gore and frequent jokes scattered throughout the movie, much unlike its previous counterparts who focused on making suspenseful, serious scenes, intended to create deep feelings of dread within the viewer’s heart.

Furthermore, in the previous films, his motive, despite lacking in traction, had always been clearly implied. In the original 1978 movie, his first murder was his sister, who had neglected her babysitting duties in favor of messing around with her boyfriend. Later on, when he escapes the mental hospital and returns to his place of origin, his main targets all share common characteristics with that of his sister: babysitters, neglectful, boyfriends, and the like.

Even in the 2018 sequel, Michael’s motive, fueled by Dr. Ranbir Sartain’s obsession, is implied to be “finishing what he started”, as he continues after Laurie Strode, additional killings taking place along the way. Yet, in the most recent addition, he seems solely focused on the aspect of murder, even taking extra time to bask in the kill for a few.

Lastly, the focus placed on the negative effects a mob mindset could have felt out of place in a series such as this. In the past, the movies followed the traditional “creepy killer” trope, though Halloween Kills veers away from this.

As the townspeople become blinded by rage for Michael and his misdeeds, they misidentify another person and end up driving a mentally unwell hospital patient to suicide. Although this concept could be an intriguing movie on its own, the amount of time spent setting up that separate storyline carved the film into unconnected fragments, leaving it with an unorganized and confusing plot.

All-in-all, Halloween Kills is an underwhelming outlier in the popular series from which it originates. Intended for release in Fall 2022, the final addition to the series, Halloween Ends, will hopefully provide a conclusion that ties together the now fragmented plot and binds all loose ends.